Check back here regularly to find out where to catch up with Steve in his different line ups. 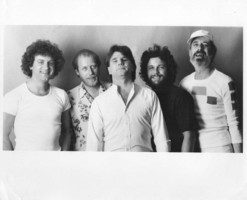 Early 70s... Slim Chance, the band formed by Ronnie Lane; a true showman in action both on and off stage. A gentleman and talented troubadour.

Mid 70s...the iconic Meal Ticket, then Frankie Miller’s Band, a short spell with The Sutherland Brothers, the legendary Chuck Farley in 1980 (still popping up from time to time) Hinkley’s Heroes and a long standing working relationship with Roger Chapman and his Short List from 1981.

1989 started a project with bass man Malcolm Hoskins from Little Sister. This led to a good rocking crew, The New Heaters, all of whom feature on Steve’s 2010 album “The Wrong Road Home”. Special guests on vocals are Charlie Dore, Becky Clowes and Andy Winfield.

There is a long-standing association with The Good Men in the Jungle, fronted by Becky Clowes and Alun Davies, who is still called upon by his long-time friend Yusuf Islam for world-wide concerts. 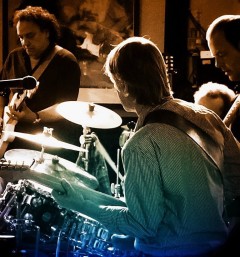 The New Heaters at the Grey Horse